Gateshead Harriers & Athletics Club have produced and been associated with the success of some amazing athletes and teams over the years including many international athletes; Olympians & Paralympians; National, European, Commonwealth, World, Olympic & Paralympic medallists & Champions who have set National, Area and World Records during their careers and won landmark victories putting the club firmly on the map. Around the world we are proud to be known as ‘The Famous Gateshead Harriers’ and we hope to add to this section of the website as a resource for current and future generations of Gateshead Harriers to be proud of and to aspire to match and surpass.
If you would like to contribute to a feature on a particular athlete or team of the past with notable achievements then get in touch via the website contact page.

When one thinks of the many sporting heroes who have emerged out of the North East, the name Brendan Foster always springs to mind. Hebburn born, Harrier legend, Brendan Foster has enjoyed a glittering sporting career both on and off the track; competing no fewer than 20 times for Great Britain in the years 1970- 1980, and contributing much effort towards developing the North East running scene into what it is today.
On the track, Foster was renowned for setting a harsh pace through the mid-section of his races. Competing in the 10000m at the Montreal 1976 Olympics, Foster collected bronze, the only track and field medal that Britain would claim at those games, after setting an impressive meeting record of 13.20.34 in his heat. He won 2 European medals: bronze in the 1971 1500m and gold in the 1974 5000m. He also collected silverware in the commonwealth games; bronze in the 1970 1500m, silver in the 1974 5000m, and bagged both gold and silver in the 1978 10000 and 5000 metres. He competed against and defeated fierce opponents such as the 4-time Olympic Champion, “Flying Fin”, Lasse Viren- whom he outran in the 2 mile race at the Coca-Coca International meet at Crystal Palace in 1974, after also beating him to 5000m European Gold in Rome earlier that year.

After teaching chemistry to students such as football manager Phil Brown at St Joseph’s school in Hebburn, where he too had been educated, Foster found himself employed by Gateshead Council, where he immediately began planning the “Gateshead Games”. In the same year as his Rome victory, Brendan marked the opening of a new Gateshead Stadium track by predicting that he would run a world record in the 3000m- which, true to his word, he did, in a time of 7.35.1. This wasn’t his first World Record however, as he had ran 8.13.68 for 2 miles back in 1972. These 1974 accomplishments merited him with the title of the BBC’s “Sports Personality of the Year”. The final major event of his competitive career was finishing 11th in the 1980 Moscow Olympic Games.
Just prior to hanging his spikes up for good, Brendan competed in the New Zealand “Round the Bays” run with fellow athlete Dave Moorcroft. It was this run that planted the seeds in Brendan’s mind to plan a similar mass participation event; the likes of which that had never before been hosted on such a scale in the UK, back home in the North East. The first Great North Run was hosted on the 28th June, 1981. It is typical of Foster to have never received a notification of approval of the event from the Police services to this date. Brendan is now a BBC sports commentator for their coverage of athletics events.
Brendan has been a credit to the athletics world throughout his life, excelling both on and off the track. His sporting achievements and entrepreneurial tact have help to make athletics much more accessible to everyone, especially here in the North East. It is because of these reasons that Brendan was elected into the England Athletics Hall of Fame back in 2010, and will forever be a Gateshead Harriers legend. 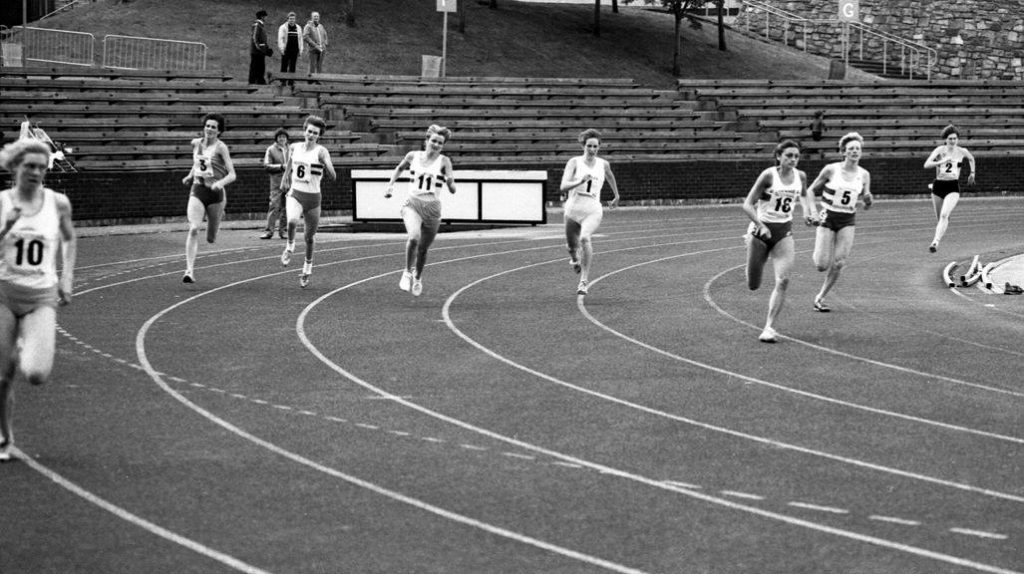 Gateshead born Angela Gilmour is an English former track athlete who competed in the 400 metres and the 4 x 400 metres relay. In 1986, she represented England at the Commonwealth Games in Edinburgh where she reached the final of the 400 metres, finishing eighth in 53.97 secs, before teaming up with Kathy Cook, Linda Keough & Jennifer Stoute to win a silver medal in the 4×400 metres relay in 3:32.82. In 1988, Angela earned selection for the 4 × 400 m relay squad for the 1988 Seoul Olympics. She didn’t compete in the heats but came in as a replacement for Janet Smith for the final. Angela had some of her best results indoors, includingreaching the 400 metres final at the European Indoor Championships in both 1989 and 1990. In January 1990, Angela competed at her second Commonwealth Games in Auckland. In the 4 × 400 m relay, she won a gold medal with teammates Jennifer Stoute, Linda Keough & Sally Gunnell in 3:28.08. At the European Championships in Split, she ran 53.00 to reach the semi-finals of the 400 metres. She ran in the heats of the 4 x 400 metres relay. The British quartet went on to win a bronze medal in the final with Sally Gunnell replacing Angela. Angela still holds the UK age 14 record for 400m of 56.19 to this day.

(Angela in the Commonwealth Games Final in Auckland NZ 1990)