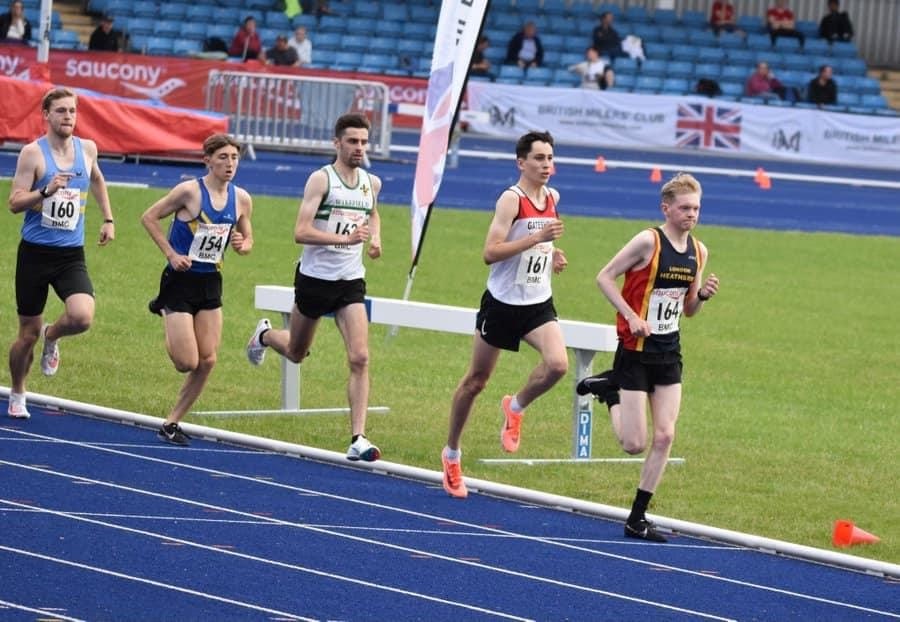 A NUMBER of athletes from the region travelled to the North West in search of fast times and those that did were certainly well rewarded.

Manchester’s Sportcity was the venue for the latest BMC Grand Prix where a series of 800m, 1,500m and 5,000m races were scheduled in the five-hour programme.

And there was a lot to be admired throughout the afternoon and early evening as one after the other North East competitors smashed their previous best times.

First up was Houghton’s Henry Johnson (under-20) in the 800m B race and the Lynn Cooper-trained athlete was in determined mood as the pacemaker took the field through the first 400m. Lying in second place with around 200m to go Johnson spurted to the front and quickly opened up a gap of a few metres which he held until entering the home straight before he was overtaken by Leeds City’s Andrew Smith who went on to win in 1min 48.54sec, as Johnson kept the gap to a minimum to cross the line in 1:48.72 which was around one second quicker than his previous best for the two-lap event.

Gateshead’s Matthew Linsley was next up in the 800m D race and here again a new pb was recorded as he came home in fourth place recording 1:51.47.

In the 800m F contest two North East athletes were on the start line and, after a strong finish, Morpeth’s Alistair Douglas, finished in fifth place in a season’s best of 1:55.43 as Durham City’s Scott Armstrong followed him home one place behind in 1:55.98.

Next up it was the turn of the metric milers and lining up in the 1,500m A race was Sunderland’s Michael Wilson. It was the Wearsiders’ first outing over the distance this campaign and he was rewarded with a time of 3:51:55.

In the 1,500m C race two of the region’s talented under-20 athletes, Gateshead’s David Race and Dan Joyce of Tynedale, were on the start line and while Joyce is more suited to 800m (English Schools’ champion 2019) he dug deep throughout to stay in contention as Race was always in the leading bunch throughout, that was until 200m to go when, full of confidence, he burst to the front with an amazing injection of speed to leave his rivals struggling to come home alone nearly two seconds clear of the runner-up to be rewarded with a time of 3:47.49, a time not only four seconds quicker than he had ever run before but his figures move him to sixth in the Po10 rankings and the leading first-year junior in the country. Joyce, meanwhile, knocked eight seconds off his previous best as he crossed the line in sixth place in 3:51.35, a time moves him to 11th in listings.

The action continued fast and furious and it was the turn of the 1,500m E contest where Gateshead’s Josh Blevins was the lone representative from the region. Competing against older athletes, Blevins showed confidence beyond his years to finish a superb sixth in a time of 3:54.84, a time which knocked 10 seconds off his previous best, but, more importantly with the English Schools’ Championships on the horizon, is now ranked number three under-17 in the country. What a pair of talented youngsters Gateshead have in Race and Blevins.

Morpeth’s Alex Brown, recent winner of the Mid Cheshire 5k, stepped down in distance to line up in the 1,500m F race and while he led with half a lap to go he was relegated to third at the line though his time of 3:56.14 was a new pb. That was also the case for the region’s only female athlete in action. Middlesbrough Mandale’s Philippa Stone and, like many before her managed a new 1,500m pb of 4:24.53 when competing in the B race.

It was the turn of the endurance runners next and while Carl Smith (Tyne Bridge) showed his experience to finish a fine seventh in the 5,000m A race in 14:29.77, Morpeth’s Sam Hancox will be equally happy with his debut over the distance where he won the C contest by over three seconds in a time of 14:47.50.

Overall, some excellent performances by the region’s athletes which also shows here in the North East we have some of the leading coaches in the land. Well done to one and all.