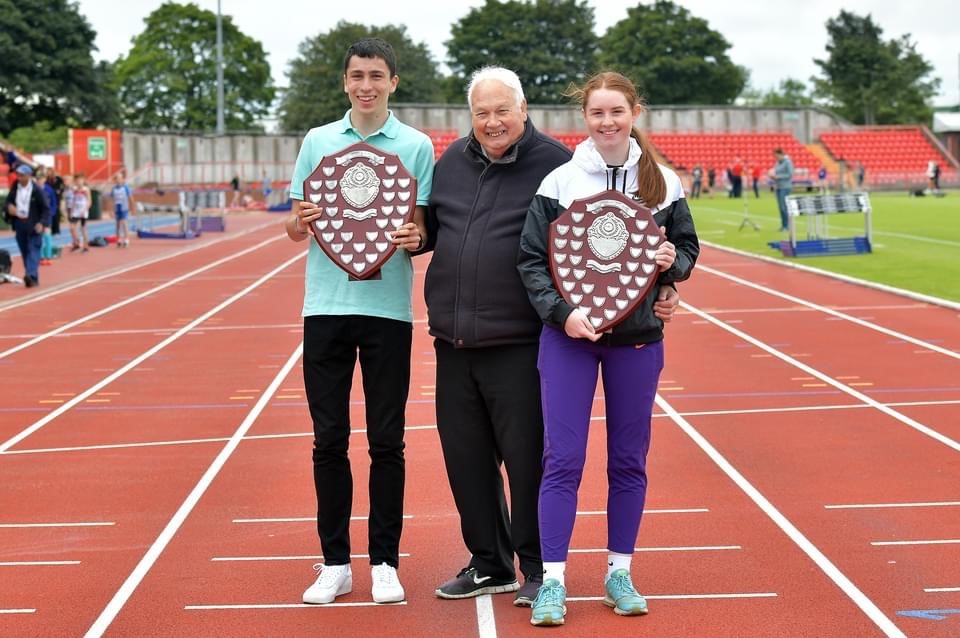 Over the years there has been a host of trophies proudly taken along the corridors of the International Stadium to be safely installed into Gateshead Harriers’ trophy cabinet and now that cabinet is about to make room for two more after I was privileged and honoured to present the latest awards to two special Gateshead athletes.

Nominations by team managers and coaches were put in front of a team of adjudicators who spent a considerable time in coming to the conclusion that Gemma Smith and David Race would be the first names to be engraved on the Achievement Award for Young Athletes’ trophies.

A tough list of criteria faced the adjudicators which included: evidence of significant improvement during their time at the club; proven ability to overcome setbacks or barriers to progress in athletics; commitment to continue in the sport and willingness to compete for the club in team events; a good attitude to training and lifestyle and set a strong example to others in a training group or teams.

Both Gemma, a talented high jumper, and David, a gifted middle distance runner, have been members of Gateshead for around six years and during that time have progressed steadily under the guidance of their respective coaches, Emily Vince and John Stephenson.

The new awards came about thanks to the generosity of Joan Smith, who linked up with the club after arriving from Northern Ireland a number of years ago and, after making friends immediately on Tyneside, set herself on the ladder to officialdom.

Regrettably, Joan had to return to the place of her birth but on leaving donated a sum of money so that young members could benefit which resulted in the club coming up with the Annual Achievement Award for Young Athletes’ trophies.

Gordon Bell, the Chairman of Gateshead Harriers, was overwhelmed with the donation from Joan, saying: “Joan was a key member of Gateshead for several years and left a big gap when she returned to Northern Ireland. However, she is still very much part of the club.  These annual awards reflect her close interest in the progress of our young athletes and the benefits of athletics to them.  We thank her for her generosity and wish her well in Northern Ireland athletics!”