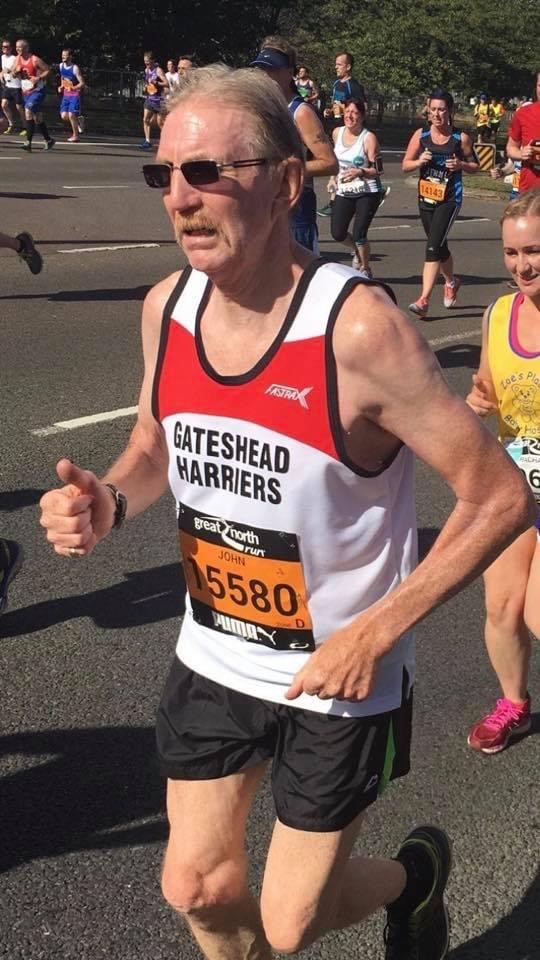 The year of 2021 is very significant with COVID affecting all of our lives, on a personal note it is huge as I will be 75 years old in early June, but even more significant is the fact that I have also been coaching within Gateshead Harriers for 50 years uninterrupted, and an actual member of the club for over 60 years.

The subject of mental and physical health is a massive issue especially within the younger generation these days and I’m sure that taking part in sport at school helped me with issues I developed which left me very shy and withdrawn, which has stayed with me to this day. But I truly believe that taking part in team and individual sport is so important for our young people as the lockdowns are proving.

I enjoyed competing on all surfaces but loved the X-country, I was part of the legendary coach, Stan Long’s, first ever group, and in my mid 20’s Stan asked me if I wanted to move into coaching and initially, under his guidance, I started my coaching journey and that was 50 years ago. Like all journeys it has had its ups and downs but I think after 50 years I can say that I love what I’m doing and the main reason for that is the athletes themselves. I was fortunate joining the club when I did as I was involved in the massive successes that Gateshead Harriers achieved throughout the 60’s, 70’s, 80’s and 90’s when they dominated the Road and X-country scene, winning numerous Northern and National titles as a team and individual, with many of our athletes gaining GB vests and International honours.

Hundreds if not thousands of athletes, female, male and of all age groups, have been a part of the group at sometime, all trying to achieve their goals within the sport, with a little guidance from the coach.  I have been fortunate to have had some success along the way and would like to mention a few of those, please may I apologise if I have missed anyone.

One of the first athletes who gained International honours was Geoff Turnbull who ran for GB in the World X-country Championships and also gained an individual medal in the World Student Games at 1500m.

Chris Roberts also represented GB at the World X-country Championships by winning the first ever trials on the Gateshead bowl behind the stadium, Chris also won national medals at indoor Championships, as did Paddy Mulhall, who were/are great friends and rivals.

Justin Reid came to the club via Newcastle University, he stayed for several years and in that time he gained a number of International vests for Ireland, he now lives in London and is still running well.

I must also mention Karen Hind, who trained with the group for a while, she achieved International standard and went on to be selected for GB on X-country.

There were many young athletes who came into the club/group who were very talented and represented the club, running in the Championship races gaining Regional, Northern and National medals (John Larkin, Gerard Hargreaves, Mark Smith, Mickey Thompson, Lewis Hogg, Barry Maskell and Sean Hall), there are really too many to mention and apologies for not doing so.

One person who I cannot leave out is Alan Buckley who came to the club as a student from Newcastle University and stayed for some 15 years. Alan achieved his success through sheer determination and hard work.  He won the Northern X-country senior men’s title and then finished well up in the GB European trials from which he was selected to run for GB in the European X-country Championships. He was a great servant to the club winning many relay medals along the way.

Every now and again you get a character in the group and Ross Murray was not only a great athlete but was good to have around the group and we had many laughs along the way. Ross represented GB as a teenager on X-country and also was double English Schools Champion at two different distances, but the pinnacle of a fabulous career was his selection to run the 1500m at the London 2012 Olympics Games, I was more than a little bit proud that day. Unfortunately, his career was cut short by injury.

We move into the last 10 years when Calum Johnson, a triathlete, joined the group and  he used the group work as his running discipline. He raced regularly for the club and our U/17’s team were third in the National X-country Championships and in the following year our U/20’s were third in the National. Recently Calum went one better by winning the National X-country title as a senior man, the last Gateshead athlete to do that was Brendan Foster.

The group has also had success at Veteran age category with Conrad Franks and Steven Medd running for England in the Vets Championships, more importantly our younger athletes look up to them.

As well as my coaching I have been involved in the Winter Team Management along with Tony Gardner, overseeing some great team and individual performances, and I also serve on the Club Committee to this day.

One person who I want to give a big thank you to is Steve Parr who was one of the first athletes in the group, he achieved International standard and for decades has helped with the coaching within the group. His son Chris followed his dad into the group and went onto run for GB in the U/20 European Track Championships, plus he was an English Schools Champion.

I have made some good friends during this time, Syd Robson and John McDonald, thank you.

A massive thank you to my wife Pam for the support she has given me over the years.

This is a brief account of my athletics life and I again appologise for those who have not been mentioned. I have thoroughly enjoyed the past 50 years as a coach, but for that to have happened it takes young people/athletes to come into the sport as that is what makes coaching so interesting.  As I said earlier being involved in sport helps with physical fitness but also with the mental fitness of a person. We have some real young talent in the group and club and it would be good to continue with that development.