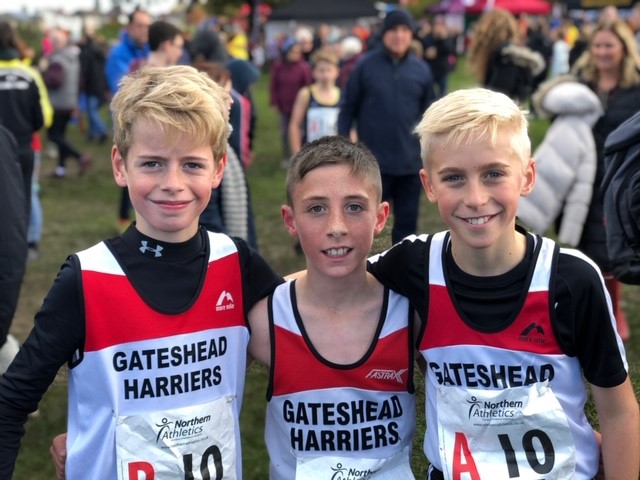 There was a limited turnout from the club at the first cross country championships of the season but the runners who did compete acquitted themselves well.  While the weather stayed fine, the muddy course and the tough competition made it a good test for them.

The programme started with the under 17s women’s race where Rosie Hughes and Ines Curran formed an incomplete team.  Both ran strongly, Rosie coming in 9th on the first leg and Ines then advancing to 4th on the 2nd leg with the 4th fastest run of the day, encouraging performances in their first year in this age group.

The non championship races for under 11s were next .  In an exciting boys race, Hallamshire held on to their early lead to finish clear winners.  The contest for among the next 3 teams was very close but the Gateshead team of Alex Lienard, Harry Hunter and Harry Garrett came through to 3rd on the final leg, 6 seconds behind 2nd placed Sale Harriers.

In the Under 13 Girls, the team of Annabel Milburn, Millie Watson and Elle Sperring, in only her second cross country race for the club, finished a creditable 16th.  In another tough race, they were the first North East club to finish.

Several call offs meant that we only had incomplete teams in both under 15 races.  Jessica Milburn, Jessica Ord and Oliver Ezeoke all gained valuable experience from turning out and running against the tougher competition.

In the Senior Women’s race, Chloe Wellings got the team off to a great start in 9th Gillian Manford and Bethany Curran did well to hold onto that position, an excellent result for them. Chloe was 15th fastest overall, a fine run.

Well done to everyone who competed and thank to parents and friends who provided transport, negotiated the traffic delays and supported the runners.