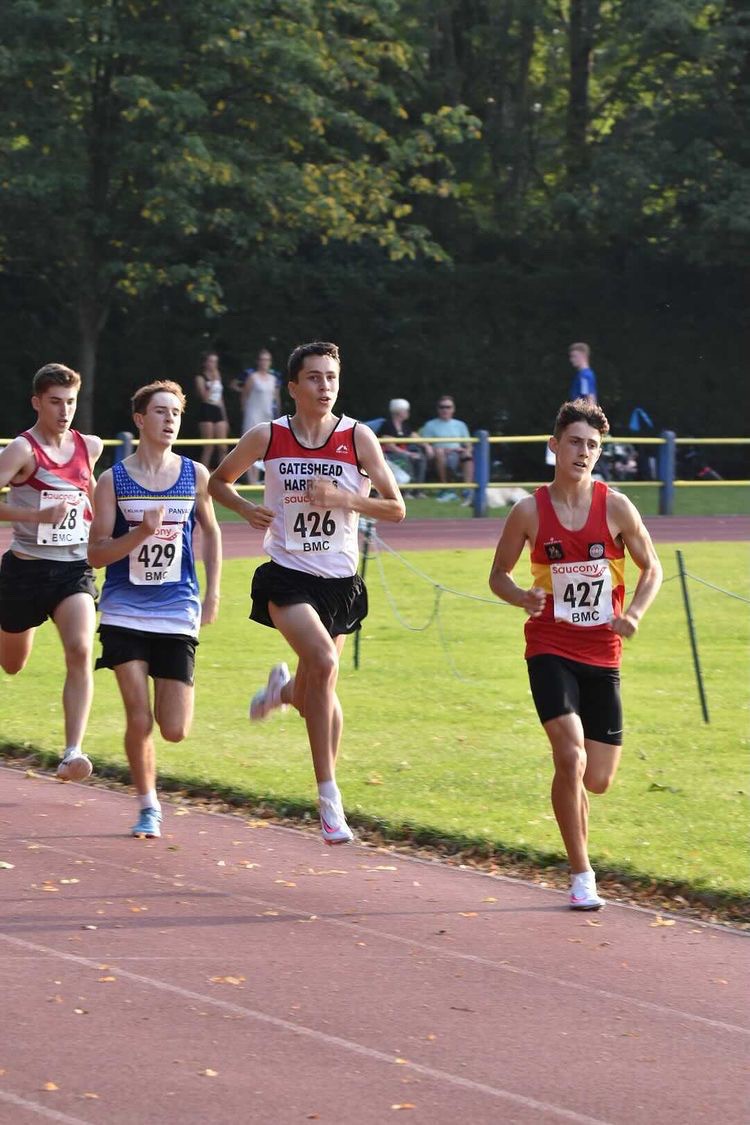 In 2020, up and coming Gateshead Harriers athlete, David Race, broke Ross Murray’s 800m and 3000m U17 club records, despite his training being interrupted by the Covid lockdown. Murray’s records had stood since 2007.

Fellow harriers athlete, Amelia Sherlock, quizzed David about his achievements and aspirations for the future.

How old were you when you started athletics and what prompted you to get into it?
My PE teacher entered me into a cross country race at the age of 10 and I ended up winning the race. I then decided to hop into another race 5 minutes later against people in the next age group up, which I also somehow managed to win. I thought I should start training and join a club after that as it was something that I enjoyed.

Did you always want to be a middle/long distance runner?

I always wanted to pursue football, but I realised that I was only good at the endurance side of the sport so I decided middle/long distance running was the best option.

What have you missed out on as a teenage boy due to your commitment to athletics?
It’s definitely affected my social life, e.g. limiting the amount of time that I have to go out with friends and also forcing me to quit other sports which I used to play such as table tennis and football, as I don’t have time to participate in multiple sports.

At what point did you realise that Ross Murray’s club record times would be within your capabilities and did you set that as one of your season’s goals?
To be honest, at the start of the season I was only looking to achieve a new PB in the 800m and 1500m as I struggled with a couple of injuries and other setbacks regarding training during the 1st lockdown. I didn’t think that I would be anywhere near Ross Murray’s record(s) until I saw the clock when crossing the finish line at a competition in Stretford where I achieved my 800m PB.

What was your biggest emotion when you found out that you had broken Ross Murray’s club records set in 2007?
I was just overwhelmed that I had broken his records as I was not expecting to run anywhere near the times which he set.

How did the global pandemic affect your training for the competition season? How fast do you believe that you could have run if your training hadn’t been interrupted?
At the beginning of the pandemic, I really struggled with training by myself and I found it really difficult to keep motivated as there were no races to look forward to competing in. However, a couple of months in, I started to find solo training a lot easier and I also started to optimise the extra free time which I had (with school not being on) and I started cooking healthy food every day, stretching and using my foam roller more frequently. I also had more time to go out on bike rides and play football. Therefore, I think that the pandemic actually had a positive effect on my track races. I do think I could have ran a little faster in the 1500m and 3000m as I only competed in 1 race for each of those events.

Who are your role models inside and outside of athletics and why?

Inside athletics: Jakob Ingebrigtsen because he has proved that younger athletes have the ability to outperform older and more experienced athletes. Outside of athletics: David Attenborough because he is raising the world’s awareness of issues that are taking place around the world, with the goal of having a more sustainable environment e.g. climate change.

If you could run an 800m race against 3 other athletes, from any era, who would they be and why?
1) David Rudisha – he has the 800m world record so he would probably push me to a good PB.

2) Donavan Brazier – just because he seems like a really cool guy and I have listened to all of the podcasts which he has featured in and he’s also currently ranked No.1 in the world for 800m.

What are your favourite competitions to compete at?

The London Mini Marathon is my favourite competition to compete at as you get to spend some time and race against some of the best junior athletes in the country and I think it’s great to be able to run on part of the course that is used in one of the worlds biggest marathon races.  I also enjoy racing at English Schools because of the high level of competition and because there is so much history behind the event.

Can you give us 2 or 3 of your favourite tunes in your training or pre-race playlist?
– Lost (by Frank Ocean) to zone out when I’m doing my warm up.
– The Hills (by The Weekend) to hype me up before going to the start line.

Which achievement to date are you most proud of?

I can’t single out a specific event but I would say being consistent over the 800m, 1500m and 3000m distances in the 2020 season as each distance requires totally different levels of endurance, speed and concentration.

Do you plan to remain in the North East or do you have ambitions to train in other parts of the world?
It would be a dream to move around the world and train in different locations. I would love to have the opportunity to train at hotspots such as Boulder – Colorado, Iten – Kenya and Portland – Oregon.

What is your ultimate aim in athletics; do you want to carry on and compete at a professional level?
I would love to be a professional athlete in the future as it’s always been a dream of mine however I’m still a long way from that and it will take a lot of hard work and dedication to reach that level.

Is there one particular question that you dread being asked?

How much chocolate have I eaten since Christmas?

Many thanks to David for his informative and entertaining answers and my very best wishes to him in his future athletics career.