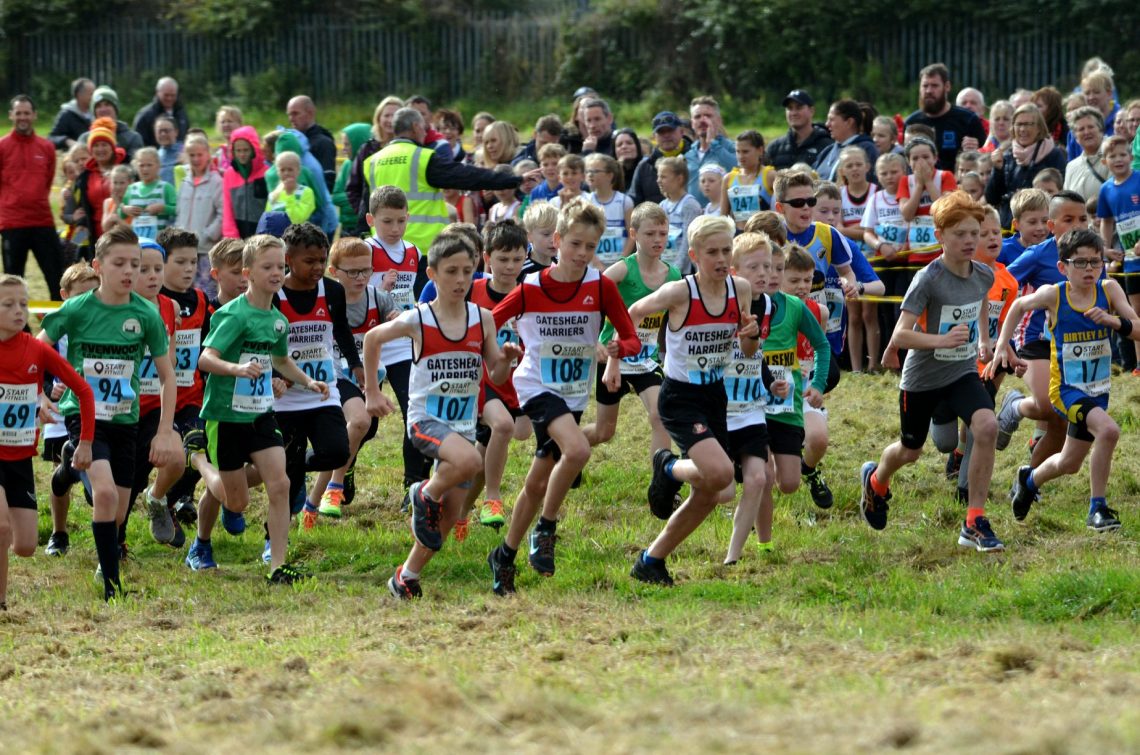 The 2019/20 harrier league season commenced at Wrekenton on 28 September in bright weather but challenging conditions following the recent heavy rain.

In the first race, Alex Lienard was 2nd in the under 11 Boys with Harry Garrett 3rd , Harry Hunter 4th and Matthew Waters 9th.  They were followed in by Habib Touray, Ben Forster, Angus McCloy and Connor Barrett.

The under 11 Girls were led in by Skye Marshall in 18th just ahead of Lyla Fenn in 19th closely pursued by Grace Clewes.  Stella Weeks, in her first cross country race, and Carrie Deighton completed a promising showing by the u11s.

Running from the fast pack, William Wells was 2nd fastest overall in the under 13 Boys in finshing 27th.  Matthew Das was 3rd fastest overall in 31st.  Noah Scott was 3rd counter in 48th  as the team finished 10th.  He was followed by Samson Oliver, Sonny Lewins, Evan Lewins and Tristan Crang.

The under 13 Girls were 2nd in their team race with Marina Swift 5th, Elle Sperring 6th and Annabel Milburn in 26th running the second fastest overall time from the fast pack.  Jessica Barrett was 33rd with Millie Watson in 44th having a strong run from the fast pack.

With Luca Shaw 14th, Theo Barron 24th and Oliver Ezeoke 26th the under 15 Boys were 3rd in their team race. Theo had an excellent run from the fast pack, finishing 3rd  fastest overall.

Anya Crowder was a fine 4th in the under 15 Girls.  The team finished 7th with Ellie Preen 32nd and Lucy Oliver 39th.  Lucy Morrison in her first cross country race did well to come in 59th.

The u17/20 Women dominated their race with Ines Curran 1st, Chloe Wellings 5th and Rosie Hughes 6th.  Ines was fastest and Chloe was 3rd fastest overall, running from the medium pack.

Although the turnout was slightly lower than last year, it was a good day for our young runners with many strong performances, several athletes competing for the first time and others coping well with the step up in age groups.  Well done to all the competitors and thanks to everybody who supported them.

Thanks go to the NEHL organisers, officials and host club Saltwell Harriers for ensuring the successful start to the season.

Thanks to Geoff Fenwick who has uploaded all the photos from the day onto the club Members Facebook page.

The next fixture is at Druridge Bay Country Park on Sunday 6 October.  Please check  http://www.harrierleague.com for all the details including the